Smyrna in the Civil War III

The Fresh unit comes across their first battlefield casualty.

When within a few miles of our destination, Col. Battle ordered a halt for a fcv moments saying:— "We must rest a little." We dropped down on the upper side of the road under the shade of some trees. A low ledge of rocks cropped out under a sugar tree, and Brothers sat down on the ledge and leaned back on his knapsack, determined not to sleep, saying : — "twould be too bad to be roused up in a moment." This was about eight oclock in the morning. The next thing he was conscious of was the rear guard of our wagon train passing by at five oclock in the afternoon. He had slept not changing his position for about nine hours. He bestirred himself quickly and with all dilligence pursued his line of march, expecting to be court-martialed for sleeping in the face ofthe enemy. But when he reached camp he found all as sound asleep as he had been, and when they awoke, by making cautious inquiry, he learned he had not been missed. We remained here at Cumberland Ford (Camp Buncker), for some time, drilling, doing guard work, fortifying and picketing the surrounding mountains. We had a false alarm here that excited us very much, and after it was over and we were back in camp, the boys commenced to tell ludicrous yarns on each other which resulted in a number of fisticuffs.
Gen. Felix K. Zollicoffer being in command, sent a detachment to Barboursville, Ky. under command of Col. Battle. Several hundred of the enemy were reported stationed there. He had little trouble in dispersing them, killing—an old sow— and losing one man, Lieut. Powell of the 19th Tennessee. We were doing outpost duty now, and made other similar expeditions into the enemy's country; one to Goose Creek Salt Works. We got the salt, but had no fight. 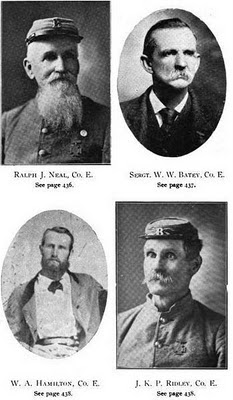