The annual Women's show at Stonecrest is upon us again, and there are numerous offering for those interested. It is happening this coming Thursday, so please make time in your schedule to become healthier.

Local vendors will be on-site offering information and giveaways, and a center stage will host live demonstrations, including laser lipolysis, cooking and fitness. Attendees can even try their skill on our da Vinci robot, the most advanced tool our experienced surgeons have available to assist them in performing specialized surgical procedures.

Register today by calling TriStar MedLine® at (615) 342-1919 or visit TriStarHealth.com/Events for more information or to make reservations.

For those that have a need, the St. Thomas Rutherford Hospital is continuing the Mobile Health Service that was once provided by MTMC.


The Mobile Health Unit, in partnership with The Primary Care and Hope Clinic, TENNdercare, and the Rutherford County Health Department, is pleased to offer physicals/immunizations and dental services.

For physicals, immunizations, and sports physicals we accept the following insurances: AmeriChoice, AmeriGroup, BlueCross/BlueShield, TennCare Select, CoverKids, Humana, Medicare, TriCare, CIGNA, and United Healthcare (UHC). For uninsured patients, the fee will be determined on a sliding scale basis. We make every effort to serve children regardless of their
ability to pay.

While it might be hotter than Hades, the Parks and rec department is hosting a Music at the Mill Event and you're invited. 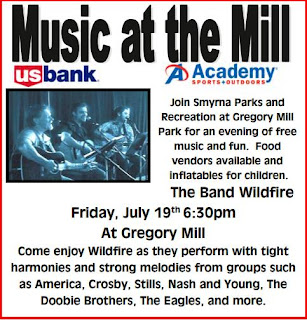 Please join the Smyrna Parks and Recreation Department for Music at the Mill in the Activity Area of Gregory Mill Park, featuring the Wildfire band. Come out and enjoy free music as Wildfire performs tight harmonies and strong melodies from many of your favorite groups. There will also be food vendors and inflatables available for children. Gates will open at 5:30p.m. with music soon to follow at 6:30p.m.
Posted by Gunner at Friday, July 19, 2013 No comments:

This is a job fair for 20 positions at the Smyrna plant. It is just in Murfreesboro. but it is during the morning, so if you have the time, go for it.

Here is a local history lecture for those who want to learn more about our town.

I wish more people took an interest in the history of our community.
Posted by Gunner at Tuesday, July 09, 2013 2 comments:

The return of the tax issue

We just finished getting slightly shafted when it comes to the issue of taxes here in Smyrna. Nothing major, but a lot of bad feelings were created. I have to say that for the most part I was not greatly bothered by the idea of a tax increase, if it was done over time and in a manner that did not seem excessive.

I also know that since I follow the town government more so than the normal person that hard choices had been made to cut the budget. In the last years positions were not refilled, some people were laid off, and other cost cutting measures were implemented such as using equipment way past their prime. One item to note that many did not notice was the proposed budget was less than the budget for last year. They had tightened their belts as far as they could, and you can only touch reserve capital so much before the lack of extra funds effects bond issues and such.

With that bit of praise said, the main issue for me is that the whole budget was put together, discussed, and worked out over 200 miles away. That was done with no video feeds, no recordings, no public audiences. While we could all have gone to view it, I like many are financially incapable of such a feat. I cannot afford a 200 plus mile trip, and three days at a hotel at the rates a tourist site charges. That is the part of the process that mainly got on my bad side.

I have been doing some research as the distance brought to my mind a simple question. Does the distance negate the fact that it was an 'open meeting'? Does it break the spirit of the Sunshine laws here in Tennessee. I have gotten some feedback from the state of Tennessee and here is what you need to know.

First we need to understand what is covered by the Sunshine law. This is from the website run by the University of Tennessee, Institute for Public Service. It says...

Please note the bold type section. This does mean the meeting is covered by the open meetings law. There is no issues in that area, but this next part is what I think needs to be looked into more.


Now while laws can be specific, some rulings on the laws can effect how they are enforced. I decided to reach out to the state of Tennessee government and ask them two questions...and I also made a mistake that I will go into later.

I found the page for the department that likely deals with these issues and made the following request for information..


Two questions on the open meetings. 1) Does distance apply to open meetings? Smyrna Tennessee government has a 'retreat' to Gatlinburg to set down and establish their budget. This is 240 plus miles from our town and out of reach for many to drive to. Does this restriction create a violation of the open meetings act. It is not recorded or video taped for later viewing. 2) Does a retreat, however informal, still require minutes to be taken for the public record. This meeting does include the entire town council and Mayor plus all administrative department heads.

The information supplied, backed up what I had already found by viewing the online ordinances and codes of the state of Tennessee. The codes as I read them say NOTHING about the distances, just the notification, and that minutes were to be kept for all meetings. I went to the town webpage that minutes were posted on and did not find them on it last week with the other minutes (The week of June 30th).

I reached out to Town Manager Mark O'Neal and he kindly sent me a copy of the minutes with the following note.


Since it is the same as a workshop and no action is taken by the Council, the minutes just document that the meeting happened. They were approved by the Council at the May meeting.

I was ready to sink my teeth into the minutes to see what happened over three days of budgeting, and helping to establish how our town would function for the next year fiscally.

In addition to the members of the Town Council, various staff members attended.
After discussion, without objection, the meeting was adjourned. 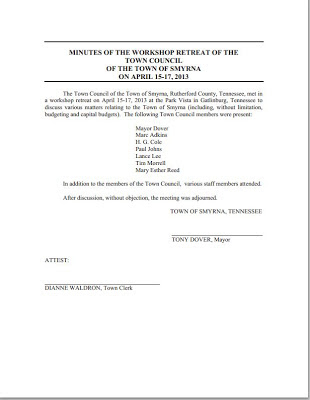 I also made a mistake. When I asked the question to the government through their submission form I did not state that I was press. I did in the follow up and they stated that I could not quote them and please forward any questions to their press office. Now I understand this as the person was, by my mistake, speaking to the press and her statements could be viewed as official statements. I have relatives that cannot talk about their jobs but to friends as they could get written up or fired. The person I was talking to did ask me if I wished to file an official complaint.

Now here's the rub. I know that no official actions were voted on during their meeting/retreat. I also know that work sessions like this must have minutes done. I honestly do not view the 'minutes' given to me as minutes. One paragraph for three days of talks, discussions, and all the rest that goes on in a budget workshop. I can file a complaint, and the state will investigate, but is it worth it?

If I file they might find that the minutes were to short and more details are required, but does that change the fact that this was done were most people could NOT view it?

The issue is the spirit of the Sunshine law, and for me there is no 'sunshine' shining from Gatlinberg. In my eyes the spirit of the open meetings law is broken, but laws are not based upon 'spirit. This is a gigantic hole in the Sunshine laws and it needs to be filled. I know that next year I will remind the people of Smyrna of the distances involved, and the lack of sunshine in spirit.

...but it really is not worth filing in my eyes. The minutes are paperwork related and does not change the distance. I don't want to be the whining little person that bitches about little niggling items like this. I'm very disappointed in our town government, but this fight is not worth the effort or the results even if I am found to be correct on the issue.
Posted by Gunner at Tuesday, July 09, 2013 No comments:

Tullahoma is a bit outside of the area of interest for this blog, but there is going to be a job fair Thursday for openings in the Nissan Battery Plant here. That might make it worth the short trip to south of Murfreesboro.

Yates Services is hosting a job fair for Nissan’s Vehicle Assembly and Electric Vehicle Battery Plant manufacturing facilities in Smyrna, Tennessee. The fair will be on Thursday, July 11, 10:00 a.m. (CDT) at the Tennessee Career Center on 111 East Lincoln Street in Tullahoma. The company is recruiting for long-term, full-time off shift contractor positions.

Yates Services is hiring for nights and afternoon shifts for the following jobs:

PAWS is offering to snip your kittens or cats for their health and the health of the community. There are 1,000 openings, and I received an email from Michael Gregory, PAWS Director, that they are still taking applications. They also chip and give a rabies vaccination free. Please. As a cat owner this is a win-win for all.

Murfreesboro, Tennessee, June 26, 2013 — Rutherford County Pet Adoption and Welfare Services, located at 285 John R. Rice Blvd., Murfreesboro, TN 37129, is offering 1,000 free sterilizations for any cat or kitten living in the Smyrna and LaVergne area, thanks to a grant from PetSmart Charities® www.petsmartcharities.org.. Residents living in these areas can call (615-898-7740 ext. 113) to see if they qualify for one of the free sterilizations through the CATSNIP program. Surgery appointments will only be accepted while grant funding is available.

“We are grateful to PetSmart Charities® for allowing a change in our PITSNIP grant to assist with cat and kitten surgeries in the Smyrna and LaVergne zones” says Michael Gregory, Director, Rutherford County PAWS. “We really want to see cat and kitten owners in these areas take advantage of these free spay/neuter surgeries to help reduce the pet population. A microchip and rabies vaccination is also being included with the surgery to help get pets reunited with their owner if they are ever lost” Gregory adds. “We feel that targeting the cat and kitten populations in these areas will make a measurable difference in our shelter intakes. We are so happy that our friends at PetSmart Charities® agree and are providing funding for this program.”


I would like to thank Nicole Farmer for posting this on the 'This is LaVergne' page and bringing it to my attention.
Posted by Gunner at Wednesday, July 03, 2013 No comments:

EarthSoul Gallery is not just an art gallery, but it is also a learning experience for those who wish to find the inner Rembrandt in their children.


"At Earthsoul Gallery, we offer a fun and safe environment where kids can nurture their creativity without fear. We will be Painting, Sculpting, Printmaking, Drawing, Inventing and Creating the world around us!​
We can't wait to see how YOU see the world!"

Check out their kids website and see what they have to offer you...or specifically your children,.
Posted by Gunner at Tuesday, July 02, 2013 No comments: