That was the first words out of my mouth when I read the following about Tony Dover from another candidate for his position.


A Smyrna mayoral candidate says he's not surprised at the resignation of Tony Dover. Jeff Hollingshead says the former mayor's decision shows he wasn't committed for the long haul...

Now they did not have the infamous quotation marks around the phrase, but the idea was there. Instead of thanking him for his service to our town during some crappy economic years, he had to be slightly insulting. Instead of saying that he understood that his livelihood and family comes first, he took a potshot at him. The soundbite that is included in the article does not impress me very much at all.

Right now I am not impressed. In the next few days he has a chance to correct his manner of addressing this issue or he can stay the course and piss more people off. It's up to him. I think real quick a lot of people will judge Jeff Hollingshead's character and decide whom they will be voting for next year.

He has now commented to the DNJ


“It’s easy to lead when things are going good,” said Jeff Hollingshead, who is general manager for the family business. “It’s hard to lead when recessions come. I think you measure a leader by not what they do when everything is going good but how they act and respond when things are tough. In business, we just went through the worst recession we’ve ever been through. We came through it and thrived. As business owners, we don’t get to quit when things get tough. We don’t get to quit when we are at home every night wondering how we are going to make the next payroll. We have to get up every morning, put our work boots on and supply solutions to tough problems.”

The economy went to hell in 2007, and Tony Dover is only NOW realizing it is hard? Not impressed here. Not at all.

Mere & Pere's jewelers is an old Smyrna business and recently they were robbed. I received a thank you note from them for posting online the information and images to help catch the suspect. In it they also said this.


I was hoping you could help us again.  We are looking for part time help, for nights and weekends.  We are asking that anyone wanting to be considered bring in a resume.  Thanks in advance.
Jennifer
Mere & Pere's Jewelers
615-355-0595


If you're looking for a job and feel you have the right skill set. please give them a call and start the process to get a good job.
Posted by Gunner at Tuesday, August 27, 2013 No comments:

Every so often the town of Smyrna declares certain old, used, and seized material goods as surplus and they put it on GovDeals to auction it off. Items such as cars, radios, play stations and chainsaws are all up for grabs. Here is a PDF of what is on the bidding block.

Asking you for a favor

I take a moment every 6 months or so to ask a favor of you, the reader. This is Smyrna has been putting out information, commentary, and even pretty images of otters since 2005. Even longer than the Smyrna AM weekly newspaper. I'm asking if you could share the page with your friends ...and enemies even, on your FaceBook page or Blogger, or any other format where you know people from Smyrna might be. This will help get us more readers, and allow more people to send us information that we might, and likely, would miss. The Share button is easy to find, or making a quick post on Blogger and we want to reach more people with your help.

Thanks
Gunner M.
Posted by Gunner at Thursday, August 15, 2013 No comments:

Music at the mill

Parks and Rec is putting on another good time tomorrow with Music at the Mill. 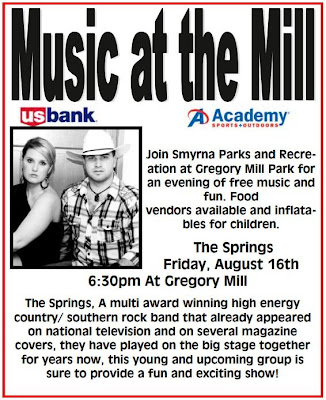 The Springs Band will be performing high energy country and southern rock during the evening and food, ice cream and cotton candy vendors will be set up for your convenience.  There will be an inflatable for children and admission is free.

Additionally, the splash pad will remain open until 8pm. 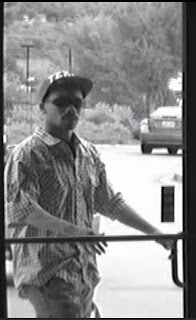 The Smyrna Police Department is requesting the public’s help in identifying a theft suspect. On 8/7/13 at approximately 1440, the suspect pictured entered Mere and Pere’s Jewelry store at 815 Industrial Dr. Suite 810 in Smyrna Tennessee.  He shopped in the store and interacted with the salesperson for approximately 15 minutes and handled several items during this time.  After the sales person presented a pair of 1.25 carat diamond earrings, he abruptly grabbed them from the display case and ran out the door.  The suspect was last seen running on foot away from the store.  A suspect vehicle was never seen.  The merchandise was valued at $1250.

He is described by witnesses as a light skinned, black male in his early to mid-20’s with a mustache and an earring in at least the left ear.  He had a slender build (5’7”-5’8” / 140-150 lbs.”),  wearing a blue baseball hat with the word “TEXAS” written in block letters.  The hat still had a round sticker on the top of the bill.  He wore black sunglasses during the entire encounter. 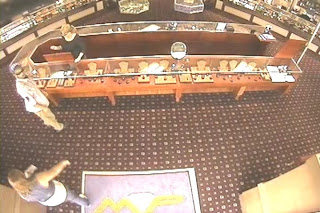 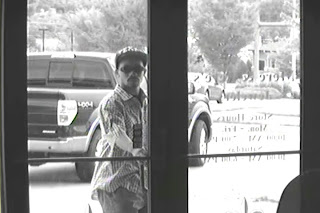 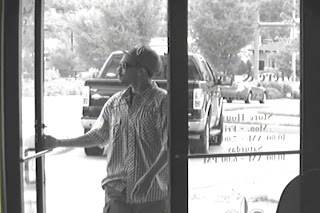 The SPD could use your help UPDATE 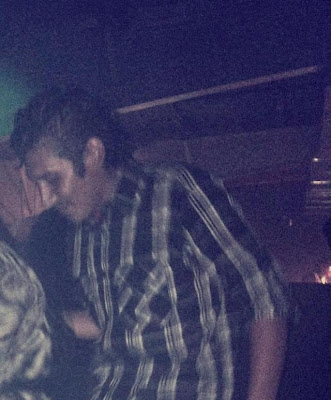 The Smyrna Police Department is requesting the help of the public in locating a rape suspect. On August 10th, 2013 after spending the night with two female friends Mr. Darwin Cruz was being given a ride by one of the females when Mr. Cruz pulled a large knife out and raped the victim in her vehicle. She was able to convince Mr. Cruz to go back to her apartment where she was able to flee. Mr. Cruz then fled the scene and has not been seen since. Mr. Cruz is an Hispanic male, 29 years of age, and is described as 5’7”, 150 pounds. He is known to frequent the Smyrna and Nolensville area. The picture attached was taken Friday night, August 9th. Anyone with any information on Mr. Cruz’s whereabouts are asked to call Detective Clete Elstran at the Smyrna Police Department at 615-459-6644.

The Smyrna Police Department wants to inform our friends in the media that the rape suspect, Darwin Cruz, that we asked for help in locating on Wednesday has been arrested. Mr. Cruz contacted the Smyrna Police Department and surrendered himself late Wednesday night. Mr. Cruz was charged with Rape and has a court date of August 22nd at 1:00pm in Smyrna General Sessions Court. His bond has been set at $300,000.

A local church is hosting a rummage sale and back-to-school event for kids. I emailed Pastor Derek Purser and he said that the rummage sale is " to raise money for school supplies for those in need.". If you have the time or need please drop by Saturday Aug. 10th.

Movie in the park tonight 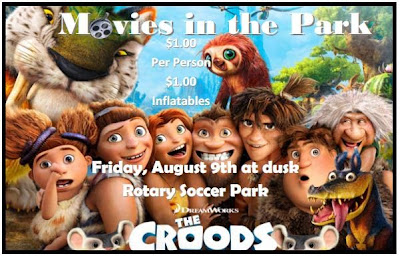 Another nice offering from the Smyrna Parks and Recreation.

The Croods
Rotary Soccer Park,
300 Soccer Way
Friday, August 9th
Gates open at 5:30pm - Movie starts at Dusk
$1 per person
Bring your blankets and/or chairs
and enjoy a movie under the stars.
You may bring in your own food or
purchase from one of our food vendors on site.

Local resident to give ADHD speech

A local Smyrna resident is giving a speech at the local NAMI meeting this month. NAMI is the National Alliance on Mental Health.


ADHD Coach Jason B. Bour, CLC will speak about ADHD and ADHD Coaching at the Aug 8th NAMI meeting at Trustpoint Hospital in Murfreesboro, TN located at 1009 North Thompson Lane.  This meeting starts at 7 PM, and is open to the public.  There is no cost to attend.

Attention Deficit Hyperactivity Disorder (ADHD) affects an estimated 4-5% of the population, or 1-2 people out of 30.  Since ADHD is a childhood disorder many people think children outgrow ADHD when in fact ADHD will follow a person into adulthood.  A child with ADHD will have problems performing at school, at home, and in social settings.  If left untreated ADHD can cause problems in the adult’s life making it difficult to hold down a job, problems maintaining relationships, difficulties managing money, time and tasks, and have poor organizational skills.  ADHD can cause problems in every aspect of  person’s life if not treated properly.

NAMI is the National Alliance on Mental Illness, the nation’s largest grassroots mental health organization dedicated to building better lives for the millions of Americans affected by mental illness. NAMI advocates for access to services, treatment, supports and research and is steadfast in its commitment to raise awareness and build a community for hope for all of those in need.

There are many ways to get involved with NAMI.  One of these ways is by becoming a member for only $35.  Chances are you know someone that is close to you that suffers from a mental illness, and by joining the growing ranks of NAMI members you can make your voice heard.  Please spread the word about the work NAMI is doing to support those affected by mental illness.  You do not have to be a member of NAMI to attend.

Jason B Bour, CLC is a Certified Life Coach/ADHD Coach practicing in Murfreesboro, TN.  Mr. Bour has dedicated his life to helping others with ADHD, and promoting awareness about this disorder in the community.  He was one of the contributing professionals on the ADHD education project sponsored by Shire Pharmaceuticals titled ADHD Shared Focus, and will be speaking that the 2013 American Association of Christian Counselors World Conference about the benefits of ADHD Coaching in conjunction with medication therapy.  Mr. Bour writes monthly articles for the Middle TN Health & Wellness Magazine, and will be the feature article in the September issue of Smyrna Life.

Mr. Bour is  member of the American Association of Christian Counselors, NAMI, and the National Association of Cognitive-Behavioral Therapists.  Mr. Bour gives back to the community by supporting NAMI, Camp Horizon (Pediatric Oncology Camp), and The Shriner's Hospital for Children.  New Beginning Coaching Services is a Certified Amen Affiliated Education Center.

For more information about ADHD Coaching, or this event you can contact New Beginnings Coaching Services at 615-534-2500.


If it is video taped I will add a link to the video at the bottom of this post after the event.
Posted by Gunner at Friday, August 02, 2013 No comments:

Every once in a while I will see the listings on the DNJ for the Rutherford counties most wanted. I always ask myself if I should post them here on the blog and on the connected FaceBook pages for local residents to see, and possibly help the local police.

The issue for me is that while they might be 'wanted', that does not translate to guilty. They might go to court and be found not-guilty, and unless I follow each case, their image will stay on the blog for ages. I'm not comfortable putting a face and a claim online, even if the word "suspected of" is added to the crime listed.

This is one service that I think about every once in a while, but always decide not too do it for many reasons. If you feel you would like to know whom is the latest on the list, you can drop by the Daily News Journal website and look at their names, addresses and pictures. I myself, will decline to post them.
Posted by Gunner at Thursday, August 01, 2013 No comments: